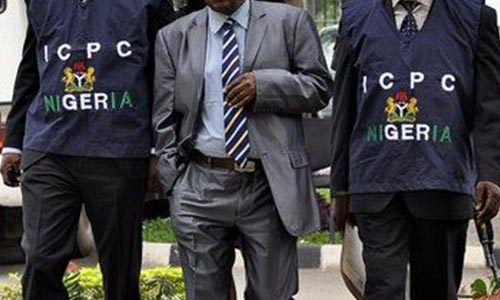 The two accused were arraigned before the court for allegedly obtaining N10m from the Redeemed Christian Church of God, the Wealthy Place Parish, Gwarimpa, Abuja, to secure land for the church, which they failed to do.
The ICPC spokesperson, Mrs Azuka Ogugua, in a statement on Sunday, titled, ‘ICPC arraigns two suspects for alleged fraud and obtaining by false pretences,’ explained that they faced six counts bordering on fraud, dishonesty, falsification of documents, and corruption.
The agency stated that sometime between 2014 and 2016, the defendants conspired to obtain the money by false pretences, thereby committing an offence contrary to Section 1 (a) and punishable under Section 1 (3) of the Advance Fee Fraud and Other Offences Act of 2006.
They were also alleged to have forged an offer of ‘Statutory Right of Occupancy’ purportedly issued by the Federal Capital Territory Administration, contrary to Section 366 and punishable under Section 364 of the Penal Code, Laws of the FCT, Abuja.
The statement read in part, “The defendants both pleaded not guilty to all the charges, and thereafter, their counsel, Nureni Sulyman and C.C. Eze, made oral applications for bail, which were not opposed by the prosecution counsel, Agbili Kingsley.
“The defendants were granted bail in the sum of N5m. In addition, they must each produce a surety who shall enter a bail bond of N5m with evidence of ownership of landed property within the jurisdiction of the court.”
Justice Idris adjourned the case till November 22, 23 and 29, 2021 for commencement of hearing.
[carousel_slide id='8496']