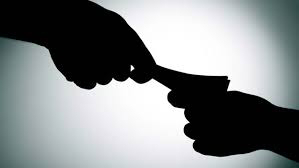 Corruption in a lay man’s word simply means the abuse of trust for the sake of private benefit. It is an anti‐social attitude awarding improper privileges contrary to legal and moral norms, and impairs the authorities’ capacity to secure the welfare of all citizens. Corruption in Nigeria is a constant phenomenon.

In 2012, Nigeria was estimated to have lost over $400 billion to corruption since its Independence and In 2018, the country ranked 144th in the 180 countries listed in Transparency International Corruption index(with Somalia at 180th, being the most corrupt, and Denmark the least).
Nigerian politicians find themselves in a strong position of power and wealth due to their connections with the oil and gas industries in Nigeria. These gas industries are under the control of the state-owned Nigeria National petroleum Company (NNPC).
Oil and gas exports account for over 90% of all Nigerian export revenues. While many politicians own or have shares in these industries, tax revenues from the energy sector are diminished and the benefits of Nigeria’s energy wealth is not evenly distributed throughout the country with Lagos State benefitting disproportionately.
Oil and gas revenues therefore account for the vast majority of the federal budget and the salaries of government officials. Vote rigging by political parties in elections is widespread and corruption is endemic within government.
Business arrangements and family loyalties dominate governmental appointments paving the way for politicians, officials and their business associates who together make up the ruling elite to ensure that they all become wealthy through behind the scenes agreements and the awarding of profitable contracts to favoured supporters. In 2018 many government employees received annual salaries in excess of $1 million.
Corruption runs through every level of Nigerian government. From massive contract fraud at the top, through petty bribery, money laundering schemes, embezzlement and seizing salaries from fake workers, it is estimated that corruption within the state apparatus costs the country billions of dollars every year..
Vote buying, electoral malpractices, Bribery, Money laundering, favoritism and nepotism, pen robbery, document forgery etc and many more too numerous to mention are the corrupt practices happening in Nigeria on a daily basis
[carousel_slide id='8496']