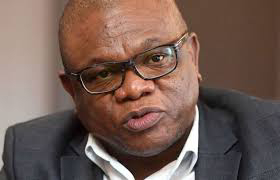 The mayor of Johannesburg was killed in a car accident as he returned from campaigning with South Africa’s president on Saturday, just over a month after being elected, his office said in a statement.
Jolidee Matongo, 46, was returning from a voter registration drive in Soweto township ahead of local elections when the accident happened.
“It is hard to comprehend this tragedy, given the vitality and passion with which Mayor Matongo interacted with me and residents of Soweto so shortly before his death,” President Cyril Ramaphosa said in a tweet.
“Nothing could prepare any of us for this sudden loss, which has deprived our nation’s economic centre of its second Executive Mayor in two months.”
Matongo’s predecessor died from Covid-19 complications in July, and Matongo was elected on August 10.
Gauteng province premier David Makhura, who was also at the Soweto voter registration drive, said the news had left him “shocked and shattered”.
“(Matongo) executed his duties with a cool and calm demeanour and remained committed to selflessly serving the citizens of Johannesburg,” he added.
Photos posted on social media by Ramaphosa and Matongo himself from earlier in the afternoon showed the two men walking around Soweto talking to residents, Matongo dressed in a bright yellow tracksuit with the African National Congress party’s logo on it.
Matongo was born in Soweto, according to the City of Johannesburg’s website, and became a member of the ANC Youth League after taking up student politics at the age of 13.
Matongo’s office said more details on the accident would be released “in due time”.
AFP
[carousel_slide id='8496']