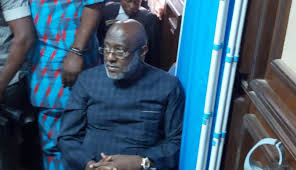 The Economic and Financial Crimes Commission (EFCC) on Tuesday returned the case file of former National Publicity Secretary of the People’s Democratic Party (PDP), Olisa Metuh, to the Federal High Court in Abuja, preparatory for his fresh trial on corruption charges.

The case file was returned to the court by the anti-graft agency in compliance with the Supreme Court judgment that ordered Metuh’s retrial on alleged money laundering related offences involving N400 million.
Newsmen sighted the case file with bundles of documents and exhibits when brought to the court by EFCC officials in the prosecution unit.
Our correspondent observed that the case file was accompanied with a letter by one Silvanus Tahir asking for a date from the Federal High Court for Metuh’s fresh arraignment after the court’s yearly vacation.
The charge with reference number FHC/ABJ/CR/05/2016 signed by Sylvanus Tahir on behalf of EFCC has seven-count criminal charges against Metuh.
It was observed that it was the same charges used by EFCC to secure Metuh’s imprisonment at the high court by Justice Okon Abang before the conviction was set aside by the Supreme Court on technological ground.
Details later…
[carousel_slide id='8496']