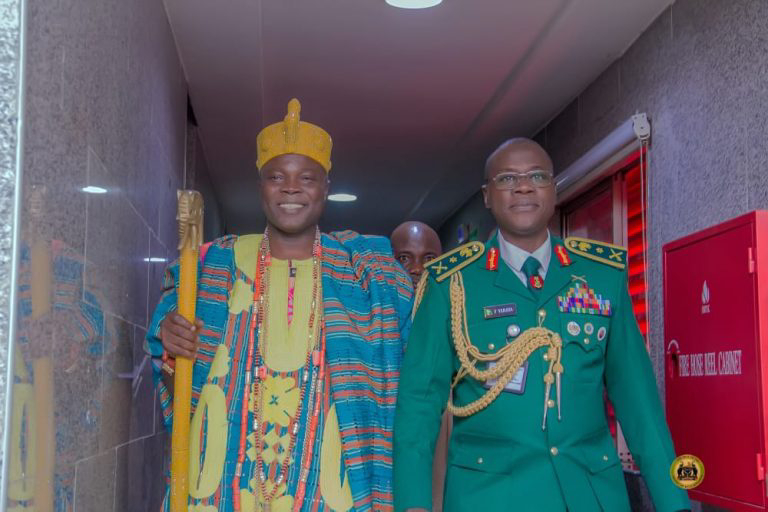 Adekunle Oyelude Makama and Lieutenant General Faruk Yahaya
The Olowu of Owu-Kuta in Aiyedire Local Government area of Osun State, Oba Adekunle Oyelude Makama, has expressed satisfaction with the growing number of insurgents surrendering to the Military while commending the efforts of the Chief of Army Staff, (COAS) Lieutenant General Faruk Yahaya and his team in the fight against insurgency.
The Olowu of Owu-Kuta made this known on Monday in a Press Statement issued and made available to newsmen.
Oba Makama, recalls that the Nigerian Army recently announced that over 200 insurgents surrendered with their families and weapons in Borno among other welcome achievements made by the Military in the recent time.
“They (insurgents) are surrendering along with their arms and amunitions, this is a good omen” the traditional ruler said.
The distinguished traditional ruler who urged the troops not to relent in dealing decisively with the terrorists that were still hiding in the forest highly commended the Chief of Army Staff (COAS) and the troops of the Nigerian Army in the ongoing war against insurgency and terrorism.
According to Oba Makama, “These gallant Military officers need our encouragement for their sustain efforts in the fight against insurgency.
” We are all happy with the development and the sustained Military onslaught at the shores of Lake Chad and Sambisa Forest.
“Yes, I join our amiable and indefatigable President Mohammad Buhari and entire people of the country to demonstrate our happiness with the clearing exercise going on at the shores of the Lake Chad as well as what is going on around the Sambisa general area which led to some of the insurgents surrendering, this is highly welcome development from our able Military”.
Oba Makama added that, the Chief of Army Staff and the troops have proven their commitment in defending the territorial integrity of the country.
The Olowu of Owu-Kuta therefore, lauds these recent outings of the Nigerian Military in tackling the insurgents while urging them to continue to rise above the situation for them to meet the expectations of the entire Nigerians like they are currently doing while urging members of the public to also demonstrate their unflinching support to the Military with their prayers and provisions of credible intelligence so that our troops can continue to take the battle to the enemies enclaves.
[carousel_slide id='8496']