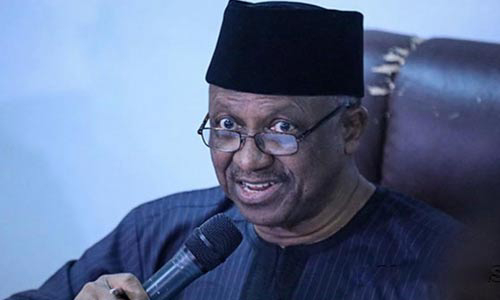 Minister of Health, Dr Osagie Ehanire
The Minister of Health, Dr Osagie Ehanire, has urged resident doctors to call off their ongoing strike, saying that embarking on industrial action amid the third wave of COVID-19, cholera outbreak in 22 states and a Marburg virus outbreak is unconscionable.
This is as he said that the Federal Government will enforce the International Labour Organisation’s policy of “No Work, No Pay”, if the doctors continue the strike, stressing that doctors will not be paid from taxpayers’ money for doing nothing.
He also denied threatening to sack resident doctors who withdrew their services nationwide since August 2, 2021, over alleged poor conditions of service, explaining that all the engagements and consultations so far have been to appeal to them to call off the strike.
Ehanire said this on Thursday, at the Presidential Villa, Abuja, during the 18th ministerial briefing organised by the Presidential Communication Team.
The minister said most of the 12 demands raised by the striking resident doctors have been met by the government while the others are under the jurisdiction of states, and not the Federal Government.
Ehanire said, “We have said openly that this is not a good time for doctors to go on strike. We’re having a strike for the third time this year, which is not good. We have appealed to them. We have been having long meetings with young doctors to tell them that look, we have a certain responsibility to our country.
“Every country that has a difficult situation at this time should understand that responsibility is on all of us. If you have any problem, any grudge, let’s talk about it. If we can’t solve it now, let’s continue talking about it until we find a solution but don’t drop work.
“I think Nigeria is probably the only country in the world today where doctors are dropping work in the middle of a threat to the whole country. So that’s what we have advised. There has been no threat. Nobody threatened anything. We are just appealing, all of us are doctors, all of us went through the same residency. We’re saying this is not the time, let’s continue to talk about it.
“Do not put people’s lives at risk. That’s what the Minister of Labour has been saying, that is what the Minister of Health has been saying. Nobody has threatened anybody with anything.”
When asked about the no-work no-pay threat, the Minister said: “Yes, but that’s a standard thing. That’s the International Labour Organisation recommendation that if you did not work, then why will you take?
“Your salary comes from taxpayers’ money. So, if you did not work, why should you be paid? Because if that is so you can be encouraged to stay home for six months and your salary is running from public funds, from taxpayers’ money, when you have not given the community any service.
“So, that no-work no-pay is not just the government regulation, it is specifically stated in the International Labour Organisation that if you do not work if you have not given any service, you can’t expect remuneration. Because you can’t go to the market and buy something for nothing. You must put down something, you must put down work.
“You cannot go to the market and take goods without paying. So, if you work, you will be paid. And we are strongly in support of the government meeting its obligations to pay what is agreed. We have said that we shall push for that, you know, working with the salaries and wages commission, the head of service, we are working to support that including paying all the insurance dues.”
The minister said the Federal Government is not entirely responsible for meeting all the demands raised by the doctors, saying, “Part of the problem we have is that some of the grudges that they have, or let us say, the demands, are with state governments, not the federal government. So, if the state government has not paid some people a salary, why go on a nationwide strike?
“Among the 12 original demands that they made, seven were state-related. They’re not federal. The Federal Government cannot compel a state to pay you a certain salary that you want. But the ones that are concerning us at the federal level, many of them are not even exactly the Ministry of Health either.
“But we support them and those with what strike is not a good tool to use. And especially when the health of the country is threatened, when people will come out and volunteer in other countries to work. That is not the time to withdraw your service. And I think again, we’ll continue to appeal to young doctors not to use the strike as a tool, especially at a time of national need that will not rest well on your conscience.”
[carousel_slide id='8496']