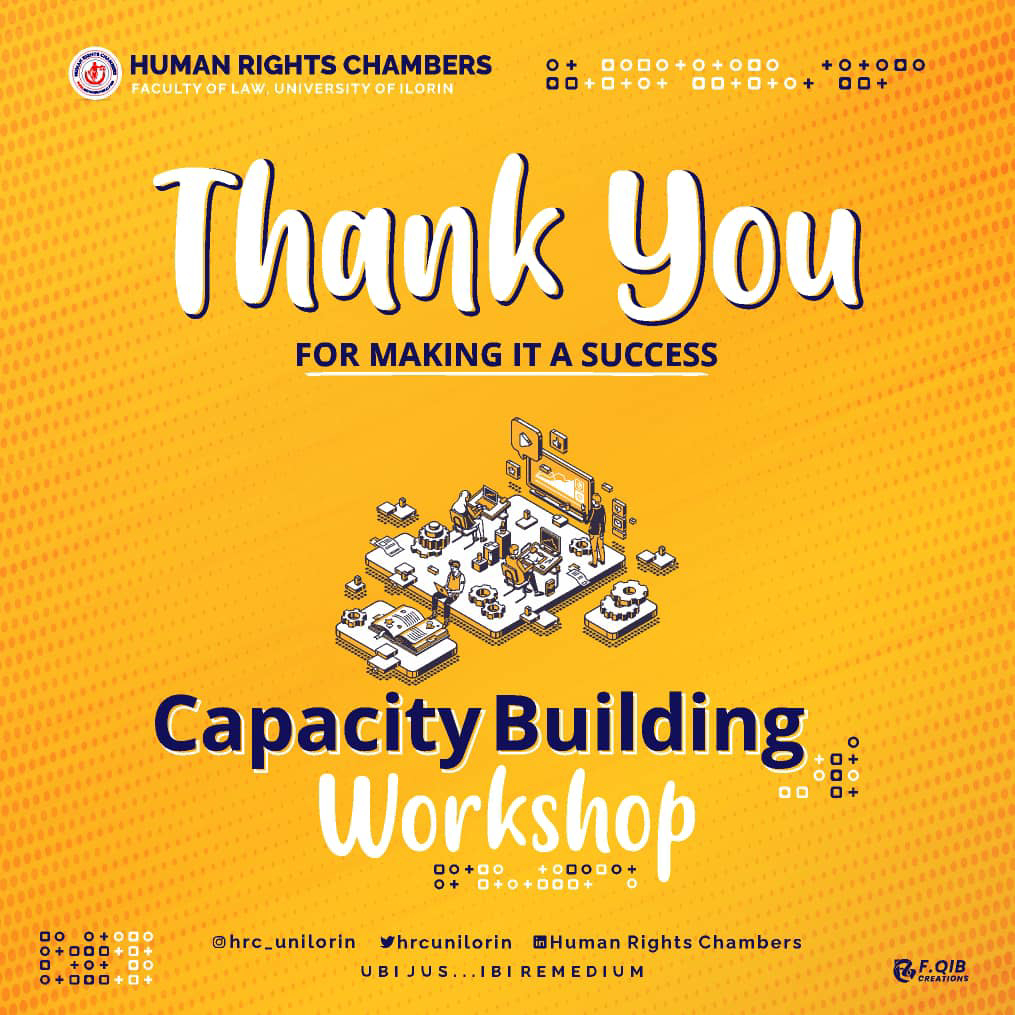 The Human Rights Chambers, Faculty of Law, University of Ilorin organized a Capacity building workshop for students of the University of Ilorin on the 28th of August, 2021.
The program which was held at the auditorium basement, University of Ilorin had in attendance over 50 participants from across all faculties in the University.
The workshop which was spanned from 11am till 4pm, featured six(6) segments namely: PowerPoint presentation, Curriculum vitae, Essay writing, Public speaking, content creation and policy writing. The facilitators for the workshop were Miss Mariam Ogunsanya, Mr Abdullateef Afolabi, Mr Atunde Ahmed and Mr Haroon Abdullah. All participants and guests alike were all duly registered by Miss Hameerah Rahman.
In his opening remarks, the Lord Activist of the Chambers, welcomed all participants and facilitators alike and gave them insights as to what to expect from the workshop.
In attendance were members of the Executive council of the Human Rights Chambers, Senator Abdulyekeen Muhammad Basheer(Faculty of Law constituency), The President of the Student Union, Mr Taofik Waliu, General secretary of the Student Union, Mr Isaac Adeleye, President of the Law Students Society, Mr Ibrahim Ismail Mojishola, The Attorney General of the Law students society, Mr Isiaka Azeez Ayinde SAU, The President of the Student Union Bar Association, Mr Adedimeji Quayyim Abdulhafeez, and a host of other dignitaries on campus.
It should be noted that some participants were sponsored by Senator Fasasi (from CIS), Senator Muhammad Basheer(from Faculty of Law) and the President of the Faculty of Engineering, Mr Salahudeen Muhammad Basheer.
In his remarks, the Registrar of the Human Rights Chambers, Mr SHUTTI Ridwanullah, commended the efforts of the facilitators and also appreciated all participants for their time.
The Lord Activist of the Human Rights Chambers, Mr Faruq Ibrahim Adeiza also commended both the facilitators and all participants for their dedication, time and efforts and also intimated them on the various programs and activities of the Human Rights Chambers.
The workshop was brought to a close with the closing prayer from Senator Abdulyekeen Muhammad Basheer.
[carousel_slide id='8496']