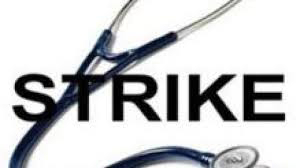 The Federal Government and the Nigerian Association of Residents Doctors are expected to sign a new agreement today in a bid to end the three-week old strike by the doctors.
The two parties held a marathon meeting on Friday where various contentious issues were sorted out, the spokesman, Ministry of Labour and Employment, Charles Akpan said in a statement on Saturday, titled, ‘An end in sight for NARD strike as doctors/ FG agree on all issues.’
The meeting which had the most high-powered representation since negotiations with doctors stretched for 11 hours, ending 1 a.m. Saturday, with all the consolidated 12-point demand by NARD, the Medical and Dental Consultants Association of Nigeria and other affiliates of NMA resolved.
In his address, the Minister of Labour and Employment, Senator Chris Ngige said the President directed him to side- step every technicalities and re-commence conciliation, especially in the background of the alternative dispute resolution window, provided by the National Industrial Court, where the matter was referred to under the instrument of article 17 of the Trade Disputes Act.
“The National Industrial Court in its wisdom advised that NARD should keep talking with its employers. So we are tapping into this widow of an alternative dispute resolution to ameliorate this situation that is already bad,” the minister said.
Ngige commended the President of the Nigeria Medical Association, Prof. Innocent Ujah for assuming his role as the leader of all doctors in Nigeria, saying all affiliate doctors’ associations are under the NMA.
He said, “When you talk to the children and they don’t listen well, you talk to their parents. The standing agreement that every negotiation by affiliate associations must be led by the NMA was not observed in the recent past. I therefore commend Ujah for assuming his role as the father of all doctors. I want you to play this role effectively and efficiently.”
He insisted the present administration has made more investment in the health sector, and for doctors and other health professionals than the previous administrations, and dismissed insinuations that the non-keeping of agreements by the Federal Government was at the root of incessant doctors’ strike.
The Minister of State for Health, Senator Olorunnimbe Mamora in his speech urged the doctors to end their strike in the interest of the nation as government tackles their demands.
However, the NMA President of NMA said the strike was avoidable and blamed some government functionaries for not playing their roles.
“As doctors, we are trained to prevent disease, cure illnesses and promote health but not trained to go on strike,” and regretted that circumstances force the doctors otherwise.
He thanked Ngige for going the extra miles to ensure that officers across Ministries and agencies who are relevant to tackling the doctors’ demands are put on their toes.
“At the meeting we had on Wednesday, before us, he was calling relevant officers, asking what have you done about this, what have you done about this? He does his own and also chases others around to ensure that progress is made,” Uja said, adding there was no misunderstanding between him and the Minister as falsely reported in a section of the media.
“At close door, the meeting tackled and resolved all the 12-point issues such as payment of House Doctors where Medical and Dental Council of Nigeria tabled evidence to show that 2800 doctors have been paid and efforts ongoing to sort the outstanding 144; the N4.8B Residency Training Fund which the Budget Office assured would be paid in seven days.
“The arrears of the consequential adjustment of the National Minimum Wage which the meeting agreed, cuts across other sectors but that greater focus must be paid to clearing that of April to December 2019 which has no ambiguity. The Ministry of Health also revealed that as of August 3, 2021, a list from 38 hospitals has been forwarded to the Budget office for inclusion in the Service Wide Vote.
“The meeting also tackled the issue of locum doctors/ emergency and migration to IPPIS, the bench fees and the hazard allowance which it agreed should be out of the negotiation table since the stalemate created by the disagreement between the NMA and JOHESU was responsible for the delay, as the Federal Government already mapped out N37.5B for it.
“The decision of the National Council on Establishment, given effect by the Circular from the Office of the Head of Service of the Federation which excised house doctors and NYSC doctors from the scheme of service was also visited,” he noted.
The parly also deliberated on skipping which is a consequential grade alignment as well as non-payment of three months Covid-19 allowance to some doctors in 2020, and migration of MDCAN to CONUAS, among others.
Apart from Senator Ngige and Senator Mamora, others in attendance included the Permanent Secretaries of the Ministry of Labour and Employment , Dr. Peter Tarfa, Health, Mamman Mamuda, Permanent Secretary, Service Welfare, Office of the Head of Service, Ngozi Onwudiwe, Director General of the Budget Office , Ben Akabueze, Chairman of National Salaries, Income and Wages Commission, Ekpo Nta, representative of the Minister of State, Finance , Budget and Planning, representatives of the Office of the Accountant General of the Federation, leaders of the NMA, NARD, MDCAN among others.
[carousel_slide id='8496']