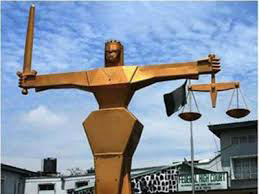 The Nigerian Bar Association, Ibadan branch, on Wednesday dragged one Dotun Jibowu, 59, before an Iyaganku Chief Magistrates’ Court in Ibadan over alleged impersonation as a lawyer.

Jibowu of E7/ 692, Agugu area, Ibadan, is facing a three-count charge bordering on impersonation, forgery and unlawful possession.
The NBA, represented by Mr Olusola Oyewale, reported the matter to the police.
The Police Prosecutor, Insp. Opeyemi Olagunju, told the court that the defendant allegedly committed the offense on Aug 9, at about 10a.m. at the Magistrates’ Court, Iyaganku, Ibadan,
“The defendant with intent to defraud members of the public alleged to have falsely represents himself to be a legal practitioner.
“He allegedly and unlawfully tendered one Obafemi Awolowo University Bachelor of Law degree certificate with the name of Adeyemi Oladipupo Jibodu.
“Jibowu was alleged to have forged one Obafemi Awolowo University Bachelor of Law degree certificate with the name of Adeyemi Oladipupo Jibodu,” Olagunju said.
He said the offenses contravened Sections 484, 476 and 486 of the Criminal Code Cap 38, Vol. II, Law of Oyo State 2000.
The defendant pleaded not guilty to the charges against him.
Counsel to the defendant, Mr Yinka Ayoola, asked the court to grant bail to his client in most liberal terms.
The Chief Magistrate, Mr Olaide Hamzat, granted the defendant bail in the sum of N100, 000 with two sureties in like sum.
Hamzat said one of the sureties must be a landed property owner within the jurisdiction of the court and adjourned the matter till Aug 25, for mention.
If Jibowu is found guilty of the three charges, he is liable to three years imprisonment for impersonation, three years imprisonment for forgery and seven years imprisonment for unlawful possession.
[carousel_slide id='8496']