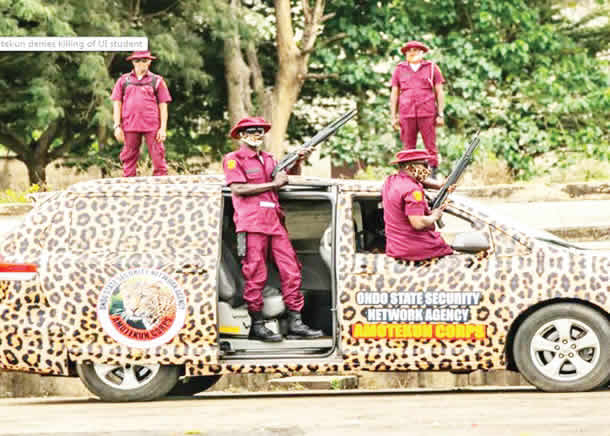 The Southwest Security Network codenamed Amotekun, Oyo State chapter has denied the killing of a 17- year-old boy, simply identified as Opeyemi, in Ibadan, Oyo State capital.
CityMirrorNews reports that scores of youths had stormed Oyo State secretariat to protest the alleged killing of the teenager by Amotekun corp in the early hours of Wednesday.
The boy was reported to have been shot by an Amotekun officer around 1am at Uncle Joe area of Mokola, Ibadan.
Briefing journalists at the Command Base in Dandaru area in Ibadan, the Commandant of the Corps, Col. Olayinka Olayanju (rtd), debunked the allegation.
Olayinka said: “The protesters were here at 6.30am and 8am and took the corpse to the secretariat.
“If you say Amotekun has killed someone, there should be evidence. All our vehicles have peculiar colour and unique number to trace.
“We have had cases like this in the past and because of the information given to us, we were able to trace.
“I can’t say what led to the activities of all these people. Because of what we have been doing for the past eight months, some people will not like Amotekun to be in existence and they feel we are a threat to them as we do not allow them to carry out their nefarious activities whether within the town or hinterland.
“Those who are peaceful and law-abiding have nothing to fear.
“We only operated at Sango community where we were called by the community members for being under attack from armed robbers.
“This is a political environment and some who are not happy with the present government will likely use such things to get at the governor.
“From the account of those who called us from Sango, they even said when the victims were evacuated to the hospital using Amotekun vehicle, they did not pass through Mokola.
“We will not be deterred, we are here to serve the people and as long as government want us to continue to do what we are sent to do, we will continue to do it.
“On my honour, Amotekun has nothing to do with the incident at Mokola.
“There are policemen and other private security men guarding the Lotto house and around the area, you can find out if Amotekun vehicle was found around that area.
“If there is any evidence implicating any of my operatives, I assure you we will not spare them. We don’t condone indiscipline and no one will be happy with extrajudicial killing.
“We are here to protect the people and can’t be going against the people.”
[carousel_slide id='8496']