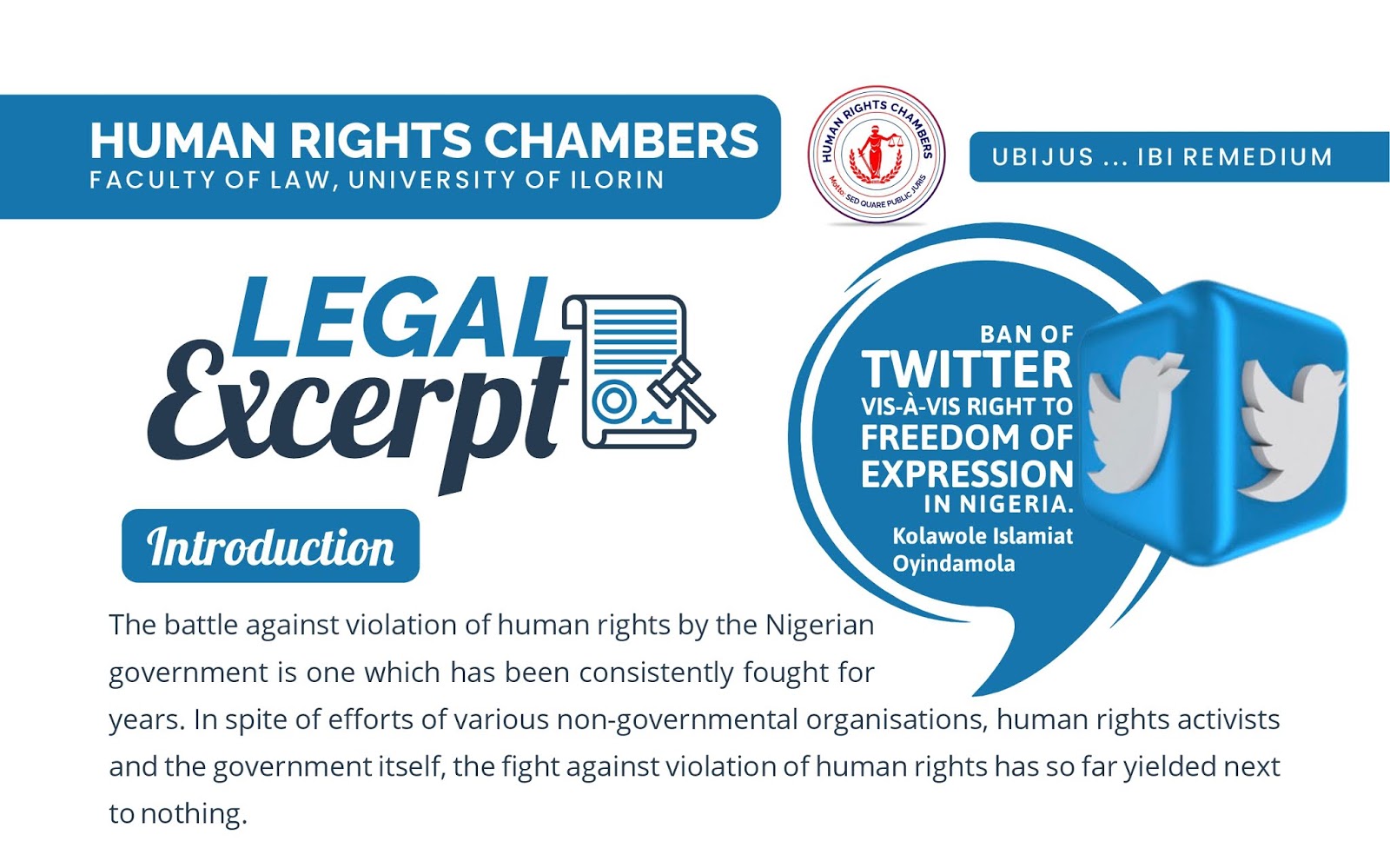 The provision of Chapter IV of the Constitution of the Federal Republic of Nigeria 1999 as altered (herein after referred to as CFRN) which highlights the rights of person and citizens with the limitations and the exceptions thereto provides, pursuant to Section 39, the rights of every person to freedom of expression which includes the freedom to hold opinions. See section 39 of the CFRN.
In IBRAHIM MASTER V. MOHAMMED MANSUR & ORS 2014 AELR 4568, Court of Appeal in adopting the words of Jacques Martin on the sanctity of Human Rights agreed thus:
“the human person possesses rights because of the very fact that it is a person, a whole master of itself and of his act and which consequently is not merely a means to an end but an end, and which must be treated as such”
Twitter is one of the avenue through which Nigerians express opinions and disseminate information, the ban of same appears as a violation of the right to freedom of expression of its users as well as a contravention of Section 39 of the CFRN.
Although, it may be argued, quite rightly that the right to freedom of expression is a right that is subject to derogation pursuant to section 45 of the CRFN. However, it is apposite to pay rapt attention to the wordings of the law. Section 45(1) of the CFRN provides
“nothing in sections 37. 38. 39, 40, 41 shall invalidate any law that is reasonably justifiable in a democratic society”
In the Nigerian society, the words of the president announcing the ban of twitter is not law. And, and on the surface, the ban of twitter cannot be said to be justifiable under section 45 of the constitution.
However, minds should be averted to the cardinal principle of law that warns against interpreting statutes in isolation. See NOBIS ELENDU V. INEC 2015, LPELR 25127. The construction of sections 39 and 45(1) should not be isolated from section 14(2)b which makes the security and welfare of the people the primary purpose of government. See section 14 of the CFRN.
Although, the circumstances surrounding the ban of twitter may not be to protect the security and welfare of the people but to preserve the ego of the president, this changes very little considering the subsequent statement issued by the executive declaring that twitter was banned to prevent the activities of “separatists inciting violence”.
This provides a safe haven for the government to legally violate the rights of the people to freedom of expression under the pretext of ensuring the security and welfare of the people and protecting National security. Section 14(2)B which by implication gives the government the power to prevent separatists from inciting violence and jeopardizing the security of the people, qualifies as “any law” in the context of Section 45 of the CFRN.
The action of the Nigerian government in banning twitter and curtailing the rights to freedom of the people to receive information may have made little or no difference in ensuring National safety, however, solace should be taken in the words of Muhammed JSC in DOKUBO ASARI V. FEDERAL REPUBLIC OF NIGERIA (2007) 12 NWLR PT. 1048 320, where His Lordship opined that where national security is threatened or there is real likelihood of it being threatened, human rights or individual rights must be suspended until national security can be protected or well taken care of. The corporate existence of Nigeria as a united, harmonious, indivisible and indissoluble sovereign nation is certainly greater than any citizens’ rights. Once the security of this nation is on jeopardy and it survives in pieces and rather than in peace, the individual’s right may not even exist.
NB: The primary purpose of this excerpt is not to consider the reasonability of the actions of the government but to reconcile same with the position of the law.
click to Download
[carousel_slide id='8496']