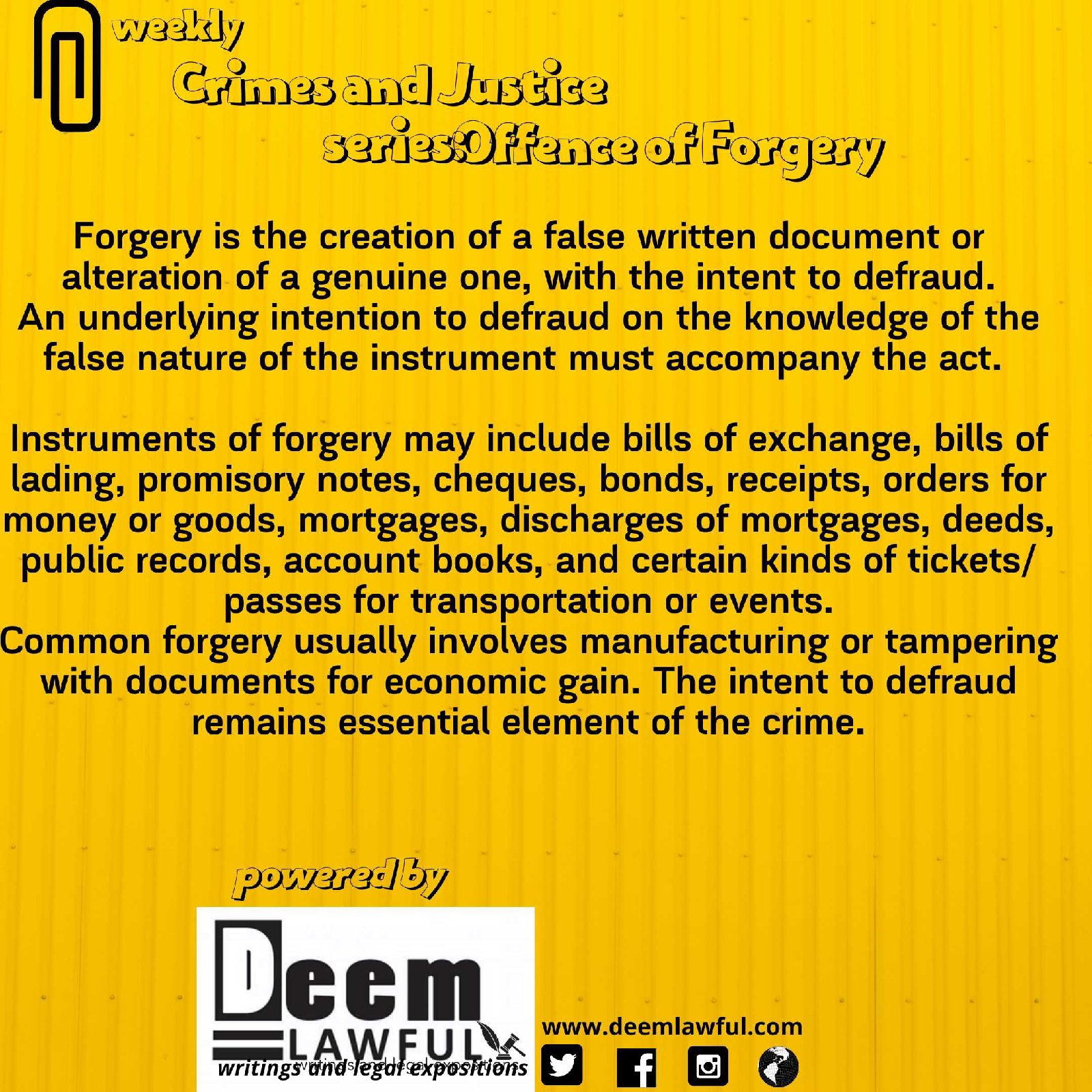 Forgery is the creation of a false written document or alteration of a genuine one, with the intent to defraud.

Forgery consists filling in blanks on a document containing a genuine signature as well as altering or erasing an existing instrument.

An underlying intention to defraud on the knowledge of the false nature of the instrument must accompany the act.

Instruments of forgery may include bills of exchange, bills of lading, promisory notes, cheques, bonds, receipts, orders for money or goods, mortgages, discharges of mortgages, deeds, public records, account books, and certain kinds of tickets/passes for transportation or events.

The related crime of uttering a forged document occurs when an inauthentic writing is intentionally offered as genuine. Some modern statutes include this crime of forgery.

Perhaps, the most famous case of forgery in the twentieth century took place in 1983 with the “discovery” of the Hitler diaries. The “forged diaries” supposedly contained passages written by German dictator Adolf Hitler between 1932 and 1945. Gerd Heidemann, a German reporter for Stern magazine, had claimed the writings as genuine and sold them. He had obtained them from Konrad Kujau, a Stuttgart dealer in military memorabilia and documents. The magazines, Newsweek and Paris Match, along with other media paid more than $5 million for the documents. Major news sources around the world quickly published major stories detailing the historical information that the diaries allegedly contained. Investigative experts from around the world later conducted forensic examinations on the diaries and found the documents to be fake. Kujau then admitted forging the diaries, and news sources immediately retracted their coverage. Both Kujau and Heidemann were sentenced to four and a half years in a German prison—but not before Kujau embarrassed the media even further by forging Hitler autographs for spectators at his circuslike trial.


Constructively, one will be right to say most forgeries are less sensational than those in the Hitler diaries but a similar case was Momoh Bible’s case.

Common forgery usually involves manufacturing or tampering with documents for economic gain. The intent to defraud remains essential element of the crime.

Counterfeiting, often associated with forgery, is a separate category of fraud involving the manufacture, alteration, or distribution of a product that is of lesser value than the genuine product.

Disclaimer:
These are just the author’s opinion on the written article and will not be liable for any inconsistency therewith.

SAHEED, Afeez Ayinde
Deemlawful is a pupil of law, University of Ilorin, Blogger | Analyst | Legal | Public Speaker | Professional | Activist |
Can be reached via:
deemlawful@gmail.com or +2349093862098
www.deemlawful.com

HOW TO MAKE WATERMELON CAKE